I always liked cycling and always owned a bike back home. But since coming to Sydney I have not owned or used a bike. Mostly because Sydney is more hills than not and I do not like any form of physical exercise. Hence I simply could not imagine riding as much uphill as is required here.

Then Markus brought up the topic of electric bikes. After a lot of no-ways on my part I finally gave in and we both bought e-bikes. It took me a while to get used to it, since it has a few quirks a normal bike does not have. But now, 10 months later, I cannot image not riding an (e-)bike anymore. It cuts so much time and money out of my daily commute and gives me a type of freedom I did not feel for a long time.

With my new-found enthusiasm for cycling I decided to enrol CarsGuide in this years Sydney Rides Business Challenge. The handful of regular riders were easily convinced. And for the rest I came up with the idea of taking groups of colleagues out to Prince Alfred Park and letting them have a go with my e-bike.

With the help and support of a few others I managed to get nearly everyone to ride for the cause. Given that every participant only had to do either 1km or 10 min, something that was acchieved by doing a round in Prince Alfred Park, it wasn’t asking too much.
On top of the lunch time rides I actually managed to get a few people riding that haven’t been cycling for over ten years. And I am fairly proud of these little successes.

The competition ran over 4 weeks. By the end of the third week it seemed pretty clear that we as a company would not be able to beat the current leader in our group, since we had pregnant women and inter-state employees that were not allowed to participate.
Apart from the company prizes there was also a prize for the person that encouraged the most people to ride. Incidentally this was also the most inticing prize with a $500 bar tab. So we came up with the idea of trying to aim for that instead.

The last week was a frantic scramble and strategising sessions around how we can come out with my name on top while also getting the last few people in the office to ride. We had one other serious contender in the race we needed to beat.

On the morning after the competition ended I was on second place, beat by 11 votes. By that time I had also turned to friends for help. After the initial disappointment had passed I was nonetheless proud that we had made 2nd spot as a company with an office participation rate of 89% and an overall company participation rate of 75%. This was an awesome result.

Three days later on a Friday that also coincided with the monthly Carbies awards at work, the official results were published. And to my huge surprise I had been named winner in the Top Encourager category.
On top of that I was also given 5 votes in the Carbies, the most votes any employee had ever received. This was mostly due to the fact that I had organised the challenge and encouraged team bonding and communication.

I am incredibly proud of the team at CarsGuide and very happy knowing that everyone enjoyed it and had fun. 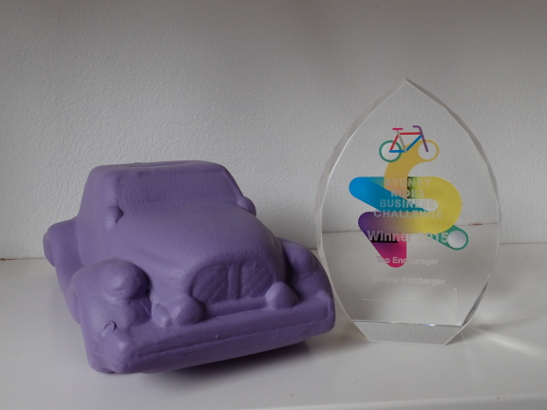